Paul and the Magic Cart 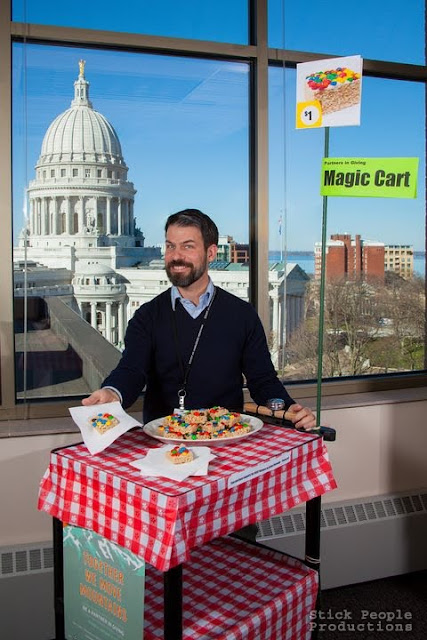 Paul works for the WI Department of Justice. When it came time for the annual Partners in Giving Combined Campaign of Dane County to encourage co-workers sign up for 2013 workplace giving, the volunteer committee come up with the idea of a cart to promote the campaign. Paul decided to spice things up a bit. He spruced up this plastic utility cart, put a bell on it, loaded it with treats and cruised the aisles to raise awareness of the campaign.

His department had a goal of a 100 people to be signed up by the end of November. With hard work of the committee and the Magic Cart, they managed to get 100+ to make a pledge. The money raised from the treats went to general support of the campaign.

After much cajoling and whining on my part, Paul finally let me make a photograph of him and the cart; even coming in to the office over the Thanksgiving weekend to do it. The DOJ's central office is just across the street from the Wisconsin State Capitol making for a beautiful backdrop. Lighting was a challenge to balance the bright mid-day light with the dark office. Even more challenging was positioning the lights so they would not reflect in the windows. I managed that fairly well, but realized I should have tried a polarizing filter on the lens to reduce reflection of the room. Every shoot always provides an opportunity of learning and growing.
Posted by Kelly Doering No comments: 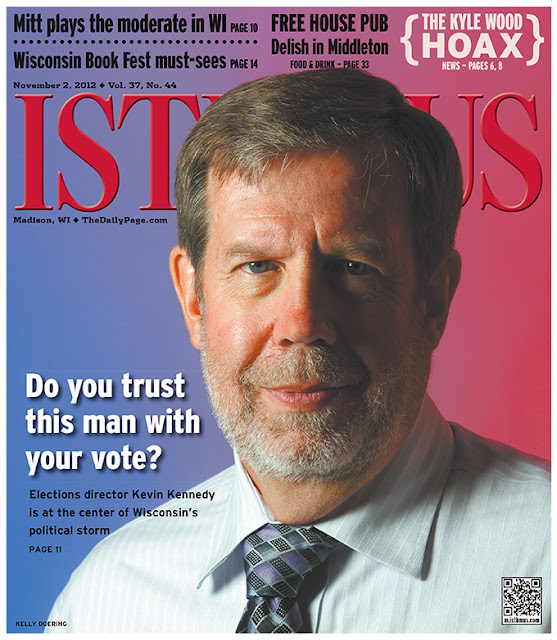 My first cover for Isthmus newspaper of Kevin Kennedy, Director and General Counsel of the Wisconsin Government Accountability Board who overseas the elections in Wisconsin.   With all the regular and recall elections in the past two years, it's been quite a challenging time for Mr. Kennedy.  Read full article on Ishmus' The Daily Page.

The photo editor at the Isthmus gave me a few ideas she had in mind for the cover including having Mr. Kennedy at a voting booth.   I arranged with the clerk's office to pick one up the day before the shoot.  Unfortunately they gave me a wheelchair accessible booth which was a simple plain black and gray one on short legs...Mr. Kennedy is over 6ft tall.   It didn't come with the standard privacy panels with "Vote" and the American Flag  on the sides either.   Not very interesting for a prop.   I had to opt for plan B.

Produced in my tight apartment studio downtown, I gelled my lights with red and blue on the backdrop to denote the colors of the two dominant political parties. The GAB is supposed to be a non-partisan body.  It worked well with Mr. Kennedy's purple tie which he was all too aware of the potential fallout if he were to have worn a red or blue tie.   I experimented a bit with different lighting to fit the article headline asking if we can trust this man.   The editor picked the a split tonal of his facing half in the light and half shadow.

It turned out well I thought, though I must say that this version didn't quite fit the Mr. Kennedy I met in person.  He was easy going, patient and with a good sense of humor. He was very easy to work with and seemed comfortable in front of the camera.  Even with all the stress of the pending presidential and contentious statewide elections just a little over a week away, he managed to have an upbeat and positive attitude.

Once again I am reminded of one of the major perks of being of photographer is the opportunity to meet a interesting people doing interesting things.  May it continue....
Posted by Kelly Doering No comments: